Was Mary Washing Dishes When the Angel Appeared? 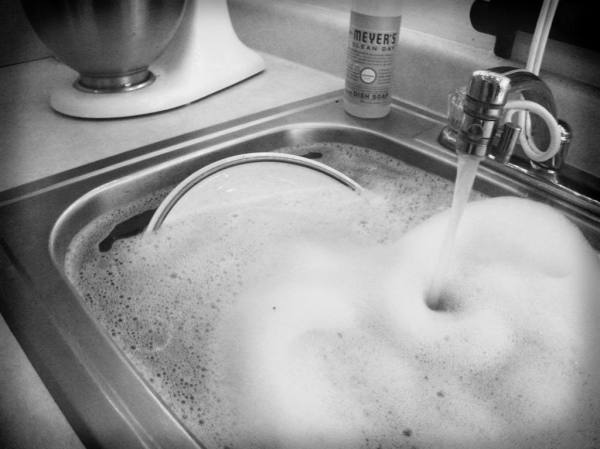 Source: Was Mary Washing Dishes When the Angel Appeared?

This question occurred to me one day as I was about one of my daily tasks:  washing the dishes.  Was Mary also washing dishes when the angel appeared to her?  What was she doing when she was asked to become the mother of the Messiah?

It doesn’t say in scripture that Mary was in the temple, or even that she was in prayer.  In Luke 1 we read:

26 In the sixth month of Elizabeth’s pregnancy, God sent the angel Gabriel to Nazareth, a town in Galilee, 27 to a virgin pledged to be married to a man named Joseph, a descendant of David. The virgin’s name was Mary. 28 The angel went to her and said, “Greetings, you who are highly favored! The Lord is with you.”

But what was she doing?  Sitting at home reading a book?   Mending a robe?  Cooking a meal?   Walking along the road?  Sitting in the temple?  Washing dishes?  Scripture simply doesn’t say.  So, I’m going to go out on a limb and say that Mary was probably going about her regular, normal day when the angel appeared to her.

But scripture also doesn’t say that Mary was surprised when the angel appeared to her, or that God had a plan for her.  We can further read in Luke 1:

29 Mary was greatly troubled at his words and wondered what kind of greeting this might be. 30 But the angel said to her, “Do not be afraid, Mary; you have found favor with God. 31 You will conceive and give birth to a son, and you are to call him Jesus. 32 He will be great and will be called the Son of the Most High. The Lord God will give him the throne of his father David, 33 and he will reign over Jacob’s descendants forever; his kingdom will never end.”

We can only assume that Mary had a strong prayer life and was used to hearing the voice of God.  She must have turned to Him in prayer often and regularly, and was trained in expecting answers to her prayers.

This is what we need to do also.

Turn to God often and regularly, and train ourselves to expect answers to our prayers.

How do we hear the voice of God?  The only way to know is to practice.  Pray often and regularly, daily if possible.  Read the bible, meditate on what you read, write in a journal, go to church, listen to Christian radio, join a bible study, and meditate on what you hear.

Talk to God.  Tell Him your ambitions, your fears, your joys, your struggles, your successes; ask Him for help, for guidance, for direction.  Then the most important thing:

We need to be still and just listen.  This is actually the most difficult part of praying because we feel like we are doing nothing.  But a relationship is a two way street and both parties need to speak.  This is how we get to know God and know what He expects of us.  He wants to talk to us.  Each of us.  He wants to comfort us, lead us, and be with us.  You might think that you will not hear God, but when you are quiet and hear His soft whisper, you will not doubt that it is God you hear.  And after a while you will expect to hear His voice also, just as Mary did.

We can do this while washing the dishes, folding the laundry, driving the car, mowing the lawn, golfing, sitting in church, walking down the street, sitting on a bus, waiting in line at the store…we can pray during any quiet time, and we should.

But the visit from the angel wasn’t over yet.  Luke 1 also says:

35 The angel answered, “The Holy Spirit will come on you, and the power of the Most High will overshadow you. So the holy one to be born will be called[b] the Son of God. 36 Even Elizabeth your relative is going to have a child in her old age, and she who was said to be unable to conceive is in her sixth month. 37 For no word from God will ever fail.”